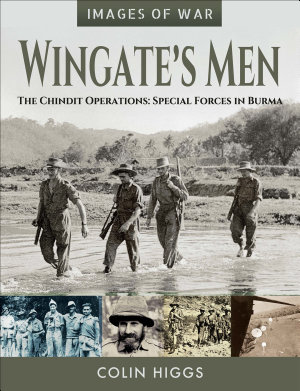 This volume of rare WWII photographs offers a vivid chronicle of the exploits and operations of the famous British special forces unit stationed in Burma. The Long Range Penetration Groups, more commonly known as the Chindits, were possibly the most famous fighting formations of the Second World War’s Burma campaign. Colonel Orde Wingate began the operations deep within enemy territory with the aim of disrupting Japanese plans for the invasion of India. In their first operation, the Chindits took the Japanese by surprise, but the Japanese responded quickly. With three brigades chasing them, they fled back to India to avoid capture. Despite heavy losses, the Chindits had proven themselves a formidable force—and their next operation would be far more ambitious. Wingate arranged for 10,000 men to be flown into the heart of Burma, causing significant mayhem amongst the Japanese forces. Wingate, however, died in a plane crash in the Burmese jungle. This wonderful collection of photographs, drawn in large part from one man’s private albums, shows the harsh conditions in which the Chindits had to operate, and the terrible physical state of many of the men who survived the jungles, the dry plains, and the ferocious Japanese enemy.

Authors: Colin Higgs
Categories: History
This volume of rare WWII photographs offers a vivid chronicle of the exploits and operations of the famous British special forces unit stationed in Burma. The L

Authors: Trevor Royle
Categories: History
Winston Churchill described Wingate as a man of genius who might well have become a man of destiny. Tragically, he died in an jungle aircraft crash in 1944.

Authors: Jon Diamond
Categories: History
Orde Wingate rose to fame by creating the Chindits in Burma in 1943. He is an extremely important figure in military history, and deserves just as much attentio

Thunder in the Argonne

Authors: Jon Diamond
Categories: History
In order to keep China in the war against the Japanese, the Western Allies believed they had to return to Northern Burma. Colonel Orde Wingate, a military maver

Authors: Oliver L. North
Categories: History
From the author of "Mission Compromised" comes the first of an eagerly-anticipated series of books highlighting the most riveting stories of monumental battles

Authors: Philip Stibbe
Categories: History
This is one young officer's war story about training and inspiration in the Burmese jungle behind enemy lines. Beaten up and water tortured, yet only giving his

Authors: Daniel Berke
Categories: History
Never have I had greater respect for soldiers than those of the 14th Army who served under Bill Slim, and in particular those guys who were in the Chindit colum