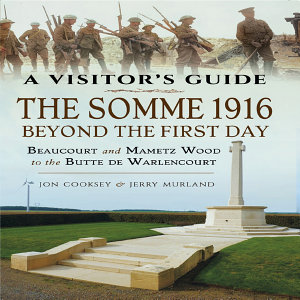 In their second Visitor’s Guide to the 1916 Battle of the Somme Jon Cooksey and Jerry Murland focus on the series of secondary battles that were key stages in the five-month struggle that followed the start of the offensive on 1 July. They take the visitor – and the reader – across the entire battlefield, covering in graphic detail sites where actions took place that are almost as famous as the Somme itself in the history of the First World War, including Mametz Wood, High Wood, Deville Wood, Guillemont, Ginchy, Pozieres and Flers. They also provide tours of the less-well-known but equally interesting sites which played important parts in the offensive as a whole. In a sequence of routes that can be walked, biked or driven they describe what happened in each place, identify the units involved, highlight the experience and exploits of individual soldiers, and point out the notable sights, monuments and cemeteries. This highly illustrated guidebook is essential reading for visitors who wish to enhance their understanding of the Battle of the Somme and the war on the Western Front. It is also the ideal companion volume to The First Day of the Somme: Gommecourt to Maricourt by the same authors.