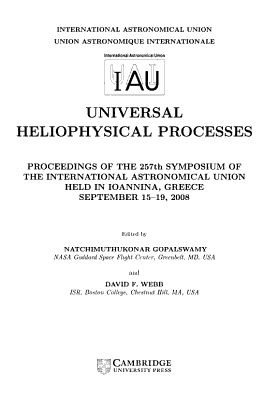 IAU Symposium 257 contains a collection of articles presented on 'Universal Heliophysical Processes', the unifying theme of the International Heliophysical Year (2007) which marked the 50th anniversary of the birth of space science. The focus of IAU S257 was on the universality of physical processes in the Solar System directly influenced by the Sun through its mass and electromagnetic emissions. The contributions deal with short and long term variability of the Sun: shocks, energetic particles, and magnetic storms directly linked to the mass emission, and climate effects due to the Sun's electromagnetic emissions. The discussion also includes topics such as the connection between solar mass emissions and galactic cosmic rays, as well as solar-stellar connections. This volume, assembling the diverse developments in space science of the past 50 years and the important topics of current interest, provides an invaluable summary for researchers in solar physics, and space and planetary science.

Authors: Karel A. van der Hucht
Categories: Science
A comprehensive and authoritative review of what has been achieved in astronomy during the years 2006 to 2009.

Authors: Ian F. Corbett
Categories: Science
A complete record of the formal organisational and administrative proceedings of the XXVII General Assembly of the International Astronomical Union.