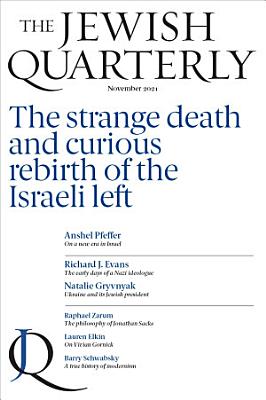 Once the nation's political powerhouse, the Israeli left has crumbled. What is behind this dramatic demise? This issue of The Jewish Quarterly examines the demise of Israel’s left, which dominated the nation’s politics for decades but is now weak, fragmented and shrinking. In a compelling essay, journalist and political commentator Anshel Pfeffer explores the left’s failure to articulate a persuasive vision of Israel’s national identity and future, and asks whether – and how – the left could revive. Also in this issue, historian Richard J. Evans investigates why Alfred Rosenberg, the chief ideologist of Nazism, became an anti-Semite, and academic and educator Rabbi Raphael Zarum unpacks the philosophy of Jonathan Sacks.

Authors: Jonathan Pearlman
Categories: Social Science
Once the nation's political powerhouse, the Israeli left has crumbled. What is behind this dramatic demise? This issue of The Jewish Quarterly examines the demi

The Strange Death of the Israeli Left: Jewish Quarterly 246

A Community in Conflict

Authors: Charles Wyszkowski
Categories: American Hebrew
Analyzes the lives of the immigrants and attitudes toward them, using the leading American Jewish weekly "The American Hebrew" as a principal source. Ch. 10 (pp

The Jewish Writer in America

Authors: Dewi Zephaniah Phillips
Categories: Philosophy
"This collection of essays explores Wittgenstein's significance for the philosophy of religion. Through a discussion of language-games, forms of life, and Wittg

Authors: Brian Fagan
Categories: Art
A new perspective on familiar events in history describes how a 500-year change in climate that lasted from A.D. 1300 until 1850 shaped modern European history.