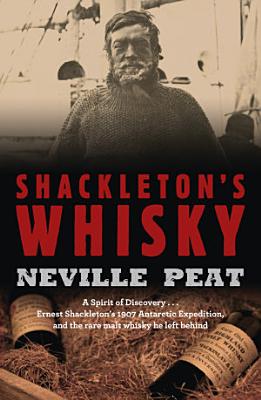 A vivid account of Ernest Shackleton's 1907 Antarctic Expedition, and the cases of Mackinlay's single malt whisky that he left behind. The incredible tale of Antarctica, malt whisky and an epic journey. Sir Ernest Shackleton's world fame is founded on the Endurance expedition of 1914-17, an attempt to cross the Antarctic continent that was foiled by the crushing of his ship in pack ice. The heroics that followed ensured that Shackleton and his men would forever have a place in the annals of polar history and world exploration. But Shackleton had come south seven years prior, leading the 1907 British Antarctic Expedition and targeting the South Pole from the opposite side of Antarctica. Rarely did Shackleton consume strong drink, and on his expeditions he tolerated only a 'mild spree' at times of celebration. But in 1907 25 cases - 300 bottles - of Rare Old Highland Malt Whisky whisky, three cases of which would ultimately lie forgotten beneath his hut at Cape Royds in the McMurdo Sound region for over 100 years, were loaded aboard his ship the Nimrod. The discovery of the whisky in 2007, and its subsequent reblending by the Mackinlay distillery, inspired Neville Peat to rexamine and explore Shackleton's first Antarctic expedition, the 'heroic' era of Antarctic exploration, and the craft and lore behind Scotland's finest dram.